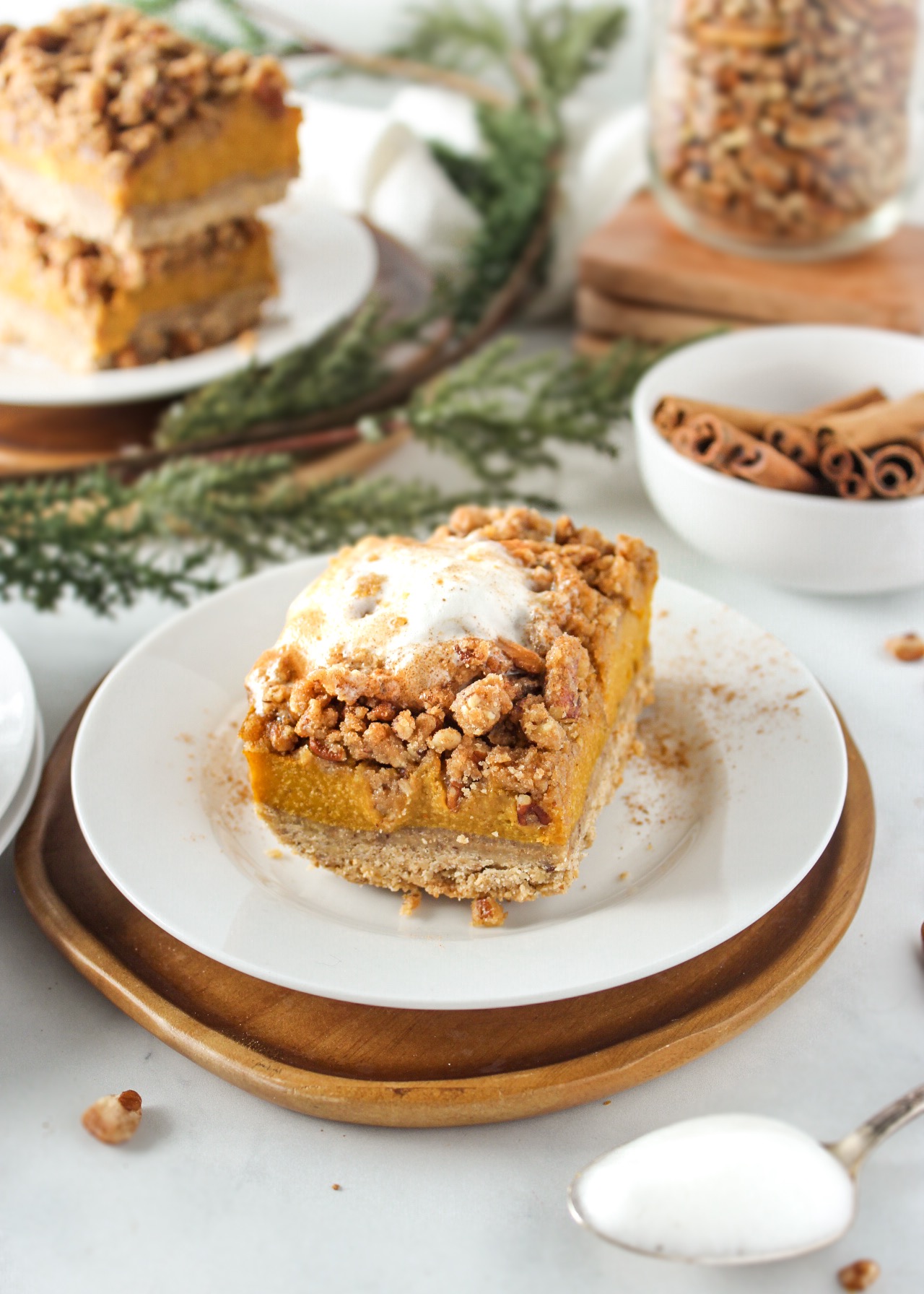 It’s not officially Thanksgiving in the US without some kind of pumpkin pie. So in honor of the holiday this week I made these Pumpkin Pie Crunch Bars. Layered with a delicious pecan crust, creamy pumpkin pie filling, and topped with a crunchy cinnamon crumble. It is a heavenly combination, especially garnished with whipped cream and chopped pecans!

I absolutely love pumpkin everything but one of my favorite things at Thanksgiving and Christmas would be when my mom would make her tasty Pumpkin Pie Crunch Bars. But since becoming vegan I have not had them. So, I decided to change that this year and make my own vegan version of these bars.

When making the pumpkin pie filling there are a couple important things when it comes to the ingredients. The first one is making sure to use the correct coconut milk. You will want to make sure to use full fall canned coconut milk not the milk from the carton.

I admit when first cooking I didn’t really know the big difference between coconut milk from the can and the coconut milk from the carton. After a lot of researching I learned that the difference in both are the textures. The coconut canned milk forms this thick cream that sits on top of the can where the carton milk is the same liquid texture throughout. Using the top of the canned coconut milk (¼ cup) not only adds a creamy texture to the pumpkin pie filling but also helps it become nice and thick.

After baking your pumpkin pie filling you are going to add your pecan crumble to the top of your pumpkin pie. Make sure to evenly sprinkle the mixture on the pie so each bar as the same amount of crumble. Bake Pumpkin Pie Crunch Bar for an additional 15 minutes at 350 degrees F (176.6 C).

Take out your bars from the oven at let cool for 5- 10 minutes. Lastly, you will want to make sure to allow your bars to set and harden in the refrigerator for at least 8 hours before cutting them into squares.

These bars are the perfect dessert for your next holiday gathering. You can dress them up by topping the bars with whipped cream, chopped pecans or pumpkin spice. Not only is it super easy but automatically adds that fluffy and creamy flavor that everyone loves.

These Pumpkin Pie Crunch Bars are:

If you make these Pumpkin Pie Crunch Bars I would love if you would snap a photo of your food and share it with me on instagram @itsallgoodvegan.com. I can’t wait to see how you like them!

Layered with a delicious pecan crust, creamy pumpkin pie filling, and topped with a crunchy cinnamon crumble. These bars are a heavenly combination, especially garnished with whipped cream and chopped pecans!


Make it Your Own