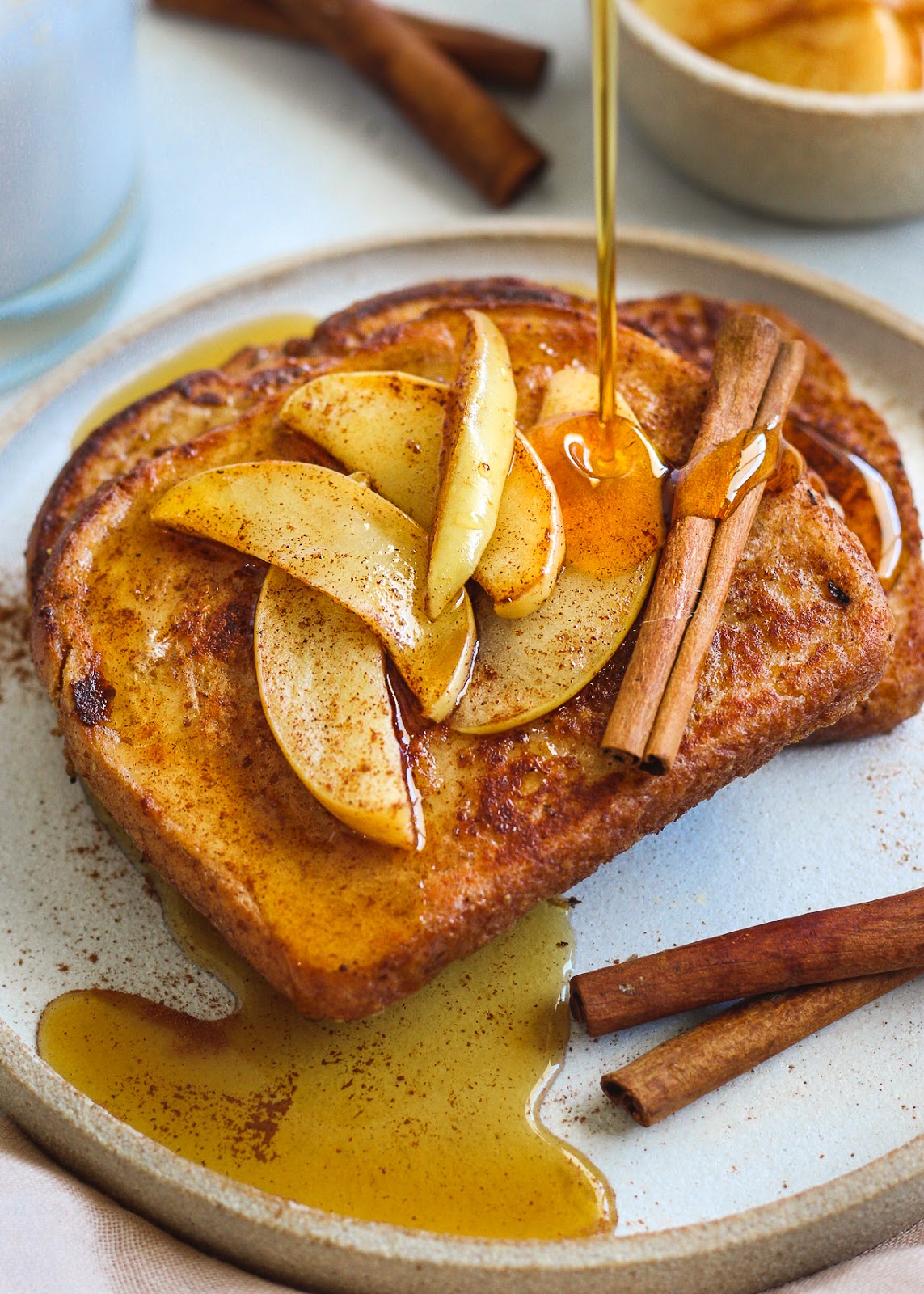 Start your morning off with this dreamy Cinnamon French Toast. Made with cinnamon, vanilla, and one special ingredient, tofu! Not only does the tofu make the batter super thick but adds plant protein to your morning breakfast or brunch.

This Cinnamon French Toast is soft and fluffy on the inside and crispy on the outside. Topped with fried apples, cinnamon, and maple syrup. Make the batter the night before to make a simple and easy breakfast or brunch in the morning.

For this french toast I used pre cut bread slices that were already packaged. The only problem that I had with buying packaged bread was that the bread was very soft. Normally I love soft bread but when it comes to french toast you want the bread to be slightly firm so it can hold up when dunking you dunk it in the chocolate mixture.

To firm up your bread I recommend that you dry your bread out by simply turning your oven to 350 degrees F (176 C). Place your bread slices on a baking pan and place in the oven for 5 minutes then flip bread slices and bake for an additional 5 minutes. This should firm up your soft bread making it easy to hold up after dipping it in the mixture.

This batter consists of cinnamon, milk, vanilla, maple syrup, and one special ingredient, tofu. You might think that is an odd ingredient to add to your breakfast or brunch but it is actually amazing. Adding tofu to this cinnamon batter not only thickens the batter to give it that french toast texture but adds plant protein to your first meal of the day. Plus you can’t even taste the tofu!

After you have made your cinnamon batter you will want to make sure to pour it in a big shallow bowl. This will make it so much easier for you to dunk each slice of bread in the bowl before frying it.

I topped my Cinnamon French Toast with fried apples, cinnamon and maple syrup. However, you can simply eat this French Toast as is or top it with what you already have in your pantry or refrigerator.

When I don’t have apple on hand here are some of my other go-to toppings for this French Toast:

This Cinnamon French Toast is:

Simple and Easy to Make

If you make this Cinnamon French Toast I would love it if you would snap a photo of your food and share it with me on instagram @itsallgoodvegan.com. I can’t wait to see how you like it!

Calling all breakfast lovers. Made with cinnamon, vanilla, and one special ingredient, tofu!

Make it Your Own

Recipes to Check Out